If the audience is looking at the iPhone, whispering to the person next to them, or wandering out of the room, these are the symptoms of lack of engagement.

Ever been to those presentations, where the audience can’t take its eyes of the presenter, hands shoot up at question time, there is laughter or empathy in the room?

Our aim is to help you become one of these presenters. We will show you; ways to release and direct energy; use of the floor; what to do with your arms and how to use your body to orchestrate the audience’s emotions from the stage.

Using the Wohlman method it is easy to speak in a true voice and take command in both thought and speech.

Where to start? The opening stanza. What comes next? What’s the message? The main point? Do you need to qualify points? Will the audience understand? I know what I want to say but don’t know how to say it. These are amongst the most common concerns we hear.

Getting to the crux of what you want to say and building a structure around this is a simple swift step-by-step system. Speech and presentations require architecture and structure, much like building a house. Understanding how to harness the highs and lows of speech preparation will remove the stress allowing you to convey exactly the right message.

Until one is commited, there is hesitancy, the chance to draw back– Concerning all acts of initiative (and creation), there is one elementary truth that ignorance of which kills countless ideas and splendid plans: that the moment one definitely commits oneself, then Providence moves too. All sorts of things occur to help one that would never otherwise have occurred.

A whole stream of events issues from the decision, raising in one’s favor all manner of unforeseen incidents and meetings and material assistance, which no man could have dreamed would have come his way. Whatever you can do, or dream you can do, begin it. Boldness has genius, power, and magic in it. Begin it now.

The Practice of Leadership (Leadership Lessons from Geese)

Fact 1: As each goose flaps its wings it creates an “uplift” for the birds that follow. By flying in a “V” formation, the whole flock adds 71% greater flying range than if each bird flew alone.

Lesson 1: People who share a common direction and sense of community can get where they are going quicker and easier because they are traveling on the thrust of one another.

Fact 2: When a goose falls out of formation, it suddenly feels the drag and resistance of flying alone. It quickly moves back into formation to take advantage of the lifting power of the bird immediately in front of it.

Lesson 2: If we have as much sense as a goose we stay in formation with those headed where we want to go. We are willing to accept their help and give our help to others.

Fact 3: When the lead goose tires, it rotates back into the formation and another goose flies to the point position.

Lesson 3: It pays to take turns doing the hard tasks and sharing leadership. As with geese, people are interdependent on each other’s skills, capabilities and unique arrangements of gifts, talents or resources.

Fact 4: The geese flying in formation honk to encourage those up front to keep up their speed.

Lesson 4: We need to make sure honking is encouraging. In groups where there is encouragement the production is much greater. The power of encouragement (to stand by one’s heart or core values and encourage the heart and core of others) is the quality of honking we seek.

Fact 5: When a goose gets sick, wounded, or shot down, two geese drop out of formation and follow it down to help and protect it. They stay with it until it dies or is able to fly again. Then, they launch out with another formation or catch up with the flock.

Lesson 5: If we have as much sense as geese, we will stand by each other in difficult times as well as when we are strong.

Who Are the Heroes?

Who are the heroes in your life? Take a look inside of you. Scan your memory for the mentors and role models who have made a difference in shaping your life direction. Imagine yourself now standing in front of one of these role models. Face them and say aloud the following: “Ever since I have known you, you have touched my life through your physical presence. In particular, you have these three qualities that I admire the most” (name them).

Now say the following words–just as you feel you would speak as though you were that very person…. “Thank you for sharing with me this beautiful acknowledgment of how you see me, and how I have touched your life. I heard you say (now repeat what you heard yourself say).

What touched you the most in your role model’s communication? You may now feel emotional in some significant way. Perhaps now that this key person in your life that has awakened you the realization that you indeed possess these very same qualities you originally acknowledged in him/her.

Now say aloud: “From this moment on, I now recognize and claim these qualities I have acknowledged in my hero (name them).

Now realize how you are now standing much more like your hero. You are now breathing and moving and feeling as the one person who has had such a positive effect upon your life.

Now you become the person whom you have always wanted to be. You have become the hero in your own life, the creator of your most desired destiny.

Awake! For Goodness sake, be willing to have it all – all that you have most desired, the fullest expression of your most passionate purpose here. You shall have it. And it shall be so!

The Way of Transformation

The man who, being really on the Way, falls upon hard times in the world will not, as a consequence, turn to that friend who offers him refuge and comfort and encourages his old self to survive. Rather, he will seek out someone who will faithfully and inexorably help him to risk himself, so that he may endure the suffering and pass courageously through it, thus making of it a “raft that leads to the far shore.”

Only to the extent that man exposes himself over and over again to annihilation, can that which is indestructible arise within him. In this lies the dignity of daring. Thus, the aim of (spiritual) practice is not to develop an attitude which allows a man to acquire a state of harmony and peace wherein nothing can ever trouble him. On the contrary, practice should teach him to let himself be assaulted, perturbed, moved, insulted, broken and battered – that is to say, it should enable him to dare to let go his futile hankering after harmony, surcease from pain, and a comfortable life in order that he may discover, in doing battle with the forces that oppose him, that which awaits him beyond the world of opposites.

The first necessity is that we should have the courage to face life, and to encounter all that is most perilous in the world. When this is possible, meditation itself becomes the means by which we accept and welcome the demons which arise from the unconscious, a process very different from the practice of concentration on some object as a protection against such forces.

Only if we venture repeatedly through zones of annihilation can our contact with Divine Being, which is beyond annihilation, become firm and stable. The more a man learns whole-heartedly to confront the world that threatens him with isolation, the more are the depths of the Ground of Being revealed and the possibilities of New Life and Becoming opened. 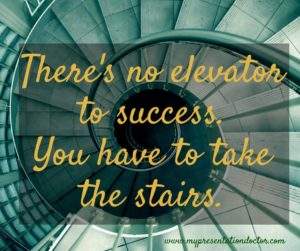 When words are not enough
Dr Gary Wohlman gives tips on how to overcome your public speaking fears.
Toggle Sliding Bar Area