Today, while working with a client who was preparing a one minute speech for an audience 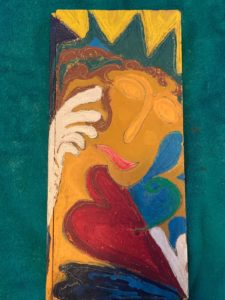 of 100 professionals, once she mastered her content and delivery I suggested she step aside for a moment, put herself in the body and consciousness of one of the attendees who will be in the room that day and say the following: “I was one of your audience members who saw and heard you present a week from now. Here’s what I liked about your presentation and how you delivered it_____ And here’s how you would reach me even more effectively – if you’d add____, delete ____, and change ____.”
Then I asked her to step back into her own body, and thank the future audience member for sharing their words and wisdom, to let them know what she heard them say, and then to do the presentation anew – as though it were the first time (It’s always the first time), and notice how her telling has now become more compelling…
This tool is the essence of guided visualisation, where one envisions a desired outcome being realised before it is actually achieved, which sets in motion a state of readiness for it to manifest even more easily.
In the French language, there is a tense called “future passé”, where someone says “I will have done something” as though what is to be done has already happened. This process makes it easier to manifest just about anything, through seeing what is desired in the future already manifest in the present.
Magic is alive, and so are you.

About the Author: Gary Wohlman